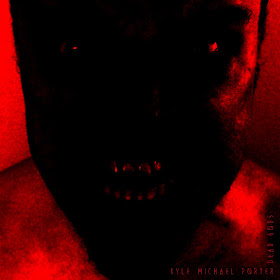 Artist and producer Kyle Michael Porter's (The Walking Wounded) last outing 'NeoNoir', released earlier this year was a distinct dive into cyberpunk atmospheres and experimental electronics. But not one to be limited by genres, Porter's new EP 'Dead Gods' turns his attention to industrial-tinged alternative rock recalling the likes of The The, Pop Will Eat Itself, Muse, and the Young Gods in the process

Opening with 'Waste', Porter blends the emotional slant of Radiohead and Muse with gritty guitars and plenty of distortion to give it a far more savage edge that recalls 'NakedSelf' era The The with the grunge turned up. 'The Math' follows on nicely with its steady pace that shows of the guitars nicely and brings the industrial edge to the fore a little more and unleashing a damn addictive chorus.

The title track 'Dead Gods' again has that savage emotion of The The crossed with the electronic and guitar flourishes of Pop Will Eat Itself that again puts the emphasis on the big chorus. 'After' has a really nice synth bass intro that almost swings into old school ebm territory before the new wave guitars and vocals hit to take things into a Young Gods direction. 'Monsters' finishes the EP off in nice way again recalling The The, PWEI and The Young Gods with it's gritty but accessibly new wave approach to song writing that drops just enough industrial electronics to give it atmosphere.

The production is top quality and while the songs have late 80s/early 90s influences running through, it remains fresh and modern by maintaining a deep and clear mix that shows off the substance of each track without relying on trying to get that “retro for the sake of it” sound.

This is another strong release from Kyle Michael Porter that shows off the depth and scope of his songwriting and production talents. The EP is approachable, catchy and keeps your attention from start to finish. The songs have a classic edge to them, but sound bang yup-to-date. It is a strong release that fans of the high tide era of alternative rock will find very easy to get into.
Sean M. Palfrey
Share
‹
›
Home
View web version