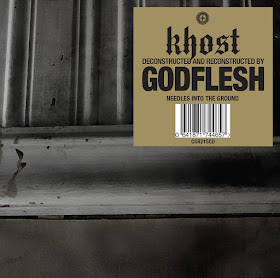 
UK experimental duo Khost, AKA Andy Swan (Iroha / Final / Atrocity Exhibition) and Damian Bennett (Carthage / Deathless) unleash a monstrous album in the form of 'Needles Into The Ground'. For this release the duo have teamed up with Godflesh founder Justin K. Broadrick who has ruthlesly deconstructed and reconstructed the source material gleaned from Khost's second album 'Corrosive Shroud' and transformed it into something quite different.

The original tracks 'Inversion', 'A Shadow On The Wound', and 'Revelations Vultures Jackals Wolves' were all cavernous and crushing in their heaviness. With a distinct low-fi edge that amplified the savage dissonance of the recordings and a flagrant disregard for genre conventions, these tracks were already unique. Khost have also added a new track to the EP in the form of 'Deathsset' which presents a still dissonant but more recognisably Godflesh influenced style that compliments Broadrick's efforts nicely.

What Broadrick has created from the source material is not a traditional remix album, but rather he has taken the sonic palette of the original recordings and weaved them into an industrial nightmare befitting the Godflesh moniker. The end result is akin to an apocalyptic machine devouring all traces of humankind from the face of the earth before setting it's sights on the planet itself. The tracks grind, rumble, strain and teeter on the brink of collapse to create an all-out sense of stifling claustrophobia.

The production is gritty, as you would expect befitting the experimental nature of the release, but it isn't just a din of mechanical noise. Broadrick has created a harsh and brutal assault on the ears, but is well mixed and to the standard we have come to expect from him.

For fans of noise, harsh industrial, and experimental metal this album is a must have. It is a dark and disturbing descent into nightmarish soundscapes twisted around an industrial metal core that will undoubtedly appeal to hardened Godflesh fans as well as anyone who enjoys the experimental end of the industrial spectrum.
Sean M. Palfrey
Share
‹
›
Home
View web version