Review: The Gifted – 'Against A Dark Background' 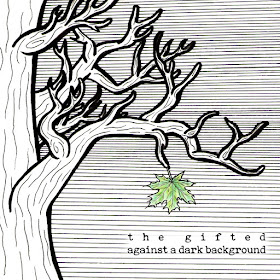 THE GIFTED
'Against A Dark Background'
HIT IT WITH A HAMMER

Sheffield alternative trio The Gifted are one of those bands that fill you with hope. Since 2008 the band have released a selection of albums, EPs and singles which has seen them grow into a formidable unit. Blending industrial, alternative rock, noise rock, metal and a refreshingly experimental approach to song-writing they blend the dissonant with the melodic with ease, moving from quiet desperation to bludgeoning malice. They may have been around for a few years already but their latest effort 'Against A Dark Background' is their most captivating effort to date.

The result of a successful crowd funding campaign, 'Against A Dark Background' is the band's third full-length self-released album. The band's sound to date has been marked by bold and heroic strides into experimental waters while maintaining their industrial rock core. And while they maintain this approach, the result is once again a unique and powerful sonic journey.

The album shows the band's mature experimentalism reflected in compelling song-writing with tracks such as 'Time Is The Fire (In Which We Burn)', 'Shut Up, Sit Down', 'Acedia', 'Is It All Really Worth It', 'Eye', 'A Different Reason Why', and 'Against This Dark Background' providing a solid backbone of hard riffs, experimental synths, and compelling, expressive vocals. While the likes of 'Waking From A Terrible Dream' and '...And So It All Comes Together' add long but still enthralling instrumental interludes.

The production is solid throughout and reminiscent of Trent Reznor's work with the bands on the Nothing Records roster in the 90s. There's a lot of grit and grunge to the sound, but it is clear, fresh and bang up-to-date.


The Gifted are a band right on the brink and are realising their potential. 'Against A Dark Background' is a phenomenal effort that can hold it's own easily against international efforts from the likes of 3Teeth and Youth Code. The Sheffield trio have grown into a tight and powerful unit that can craft intense and ambitious music that should rightly make fans of industrial rock sit up and take notice.
Sean M. Palfrey
Share
‹
›
Home
View web version