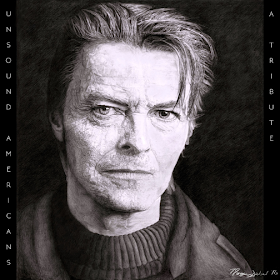 Unsound America has, over the past couple of years, produced some great tributes and compilations alongside its main releases. With an ear for unique sounds and esoteric acts the label has already amassed an impressive catalogue. With the passing of David Bowie earlier this year the label has embarked on a tribute compilation for the late Starman, and it is one the Thin White Duke would probably have approved of.

Taking in electronica, idm, darkwave, industrial, and dark pop the album sees sixteen acts take on a cross-section of classic tracks from across Bowie's career. Ranging from sensual and haunting re-imaginings from the likes of Koira, Marc Stowe, Blackberry Lilly, Anna Marie, Jason Jordan, and Deanna Lee and Jackie Lee, to the slick dark pop of Jasen Samford, Alphanaut, Sombra, and Ryan Olsen. While also taking in more raucous interpretations from the likes of Sean Fairchild, Fusion Faktor, Shadow Cast Me, and Gerald "GothiCello" Nicks. Although the coup de grâce has to be the poignant and soulful rendition of 'Strangers When We Meet' by Kyle Michael Porter that closes the album with a punch right to the feels.

This is a very strong, unique and most importantly a heartfelt tribute to the late and great David Bowie. The bands/ artists all bring something original to their tracks and don't merely play it safe. This is what Bowie did with his covers, he made them his own and it is what he would have appreciated to have happen with his music.


The production is excellent across the board. No matter what the style or the manner of recording, each song sounds clear, crisp and modern in its execution. Usually on compilations there is a little variance between tracks based on the tools at each artist's disposal. But this is pretty even throughout.

This is a really great album, one that fans of gothic/industrial music will appreciate whether they are a Bowie fan or not (and to be honest, who isn't a Bowie fan?!). Best of all it is available to download for free with a link to cancer research for a suggested donation.
Sean M. Palfrey
Share
‹
›
Home
View web version