Revolution on Stand-By - The Meaning of Shock Value in 2016 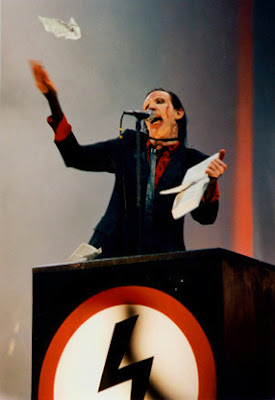 It's funny, or sad, really, how when I was a kid, I really thought the world and people, mostly, would be a lot more evolved.
I thought certain issues would have been dealt with, and that people would be over certain things, most things -like the inequity between 1st and 3rd world countries, for example.
Or genocides to claim a country's riches, or people killing other people in the name of beliefs.
Or the fact that not everyone is heterosexual.
Or women's sexuality.
Or any of society's taboos.

Hard to believe that in 2016, there hasn't been any evolution of any solution, let alone a revolution.

I can't believe there actually are still taboos in 2016.

And yet there are, and people are still likely to get shocked about anything.
And people, mostly, don't wanna be shocked.

For to shock is to shake up reality; to deliver a message, to expose other realities. The shocker will use confrontation as a tool to bring about evolution amongst the shockees.
Whoever out there shocks -please, keep on shocking.
It is of utmost importance to do so, for it is the only way we may keep on evolving.
Let's keep the revolution on stand-by, so it's ready to be declared at any time.

Thing is, it is feels like people don't want a revolution.
A revolution means getting out of your comfort zone.
But as time and history and society go on, it turns out that people fear more and more getting out of their comfort zone -a sad combination of laziness and lack of self-confidence.

And so, considering all the aforementionned issues that I can't believe are still things of the present in this day and age, I understand that people, above all, want to be comforted, not confronted. They wanna know they're not doing so bad after all, that it's ok if they've been lazy and have lacked the confidence and will to change.

As the first to always point out the Balance of All, I must clearly state how I only speak here of the mass, as there are indeed many of us who still strive to bring about evolution to society, let them be artists, scientists, teachers or politicians.

Most people, however, are terrified of what's out there, i.e. Life, and it takes a lot more strength to forge a path than to walk on paved roads.
People don't love themselves enough, or believe in themselves enough to bring their lives to the next level, and then doing so requires effort upon effort, and tremendous amounts of work, and energy, and time (trust me).
And then the thing about terrified people is that they won't be doing much with their own lives. They'll do/watch/wear/listen to what everyone else is, and get their thrills out of a TV series, an outrageous bachelor/ette party, or Siracha sauce. They won't be going out of their way to change and/or save the world, let alone change and/or save themselves. Humans want to be comforted in it being ok to not do too much. Humans do not want to be shaken up and be confronted with the fact that there is so much more to be done for the world to be a better place, and that it starts with themselves.

This is why animal videos are so popular on the Internet. Those, and videos of ordinary people doing ordinary things, like cooking, or silly things, like looking like Chewbacca.
Mostly, these videos comfort people, and make them feel like it could be them, too, or that they're better than that, or Hey, why don't I post a video of my cat as well and get 80 000 views too!

There's also the issue of safe-spaces, which I'll only tackle on the surface by putting it out there that instead of hidding in your safe space, how about you get out, face the world, grow a spine and evolve into a fearless human being.

And then it's this weird dichotomy of how, in a way, also, in 2016, it's like nothing's shocking anymore. Every possible human boundary has already been pushed, news headlines have become this repetitive shock-scheme, numbing us out. I mean, when you think about it, that's what the news are about: shocking headlines. Bombs and killings, bombs and killings, bombs and killing -aimed at overwhelming the average citizen so much that of course, when it comes to entertaiment, people are likelier to choose artists that sound and feel like comfort food.

There was a time when music drove the culture, and when music did mean a revolution, change.
Seems like from the 70s to the mid-90s, society embraced shock-value, and that people fought for their right to evolution, through the music they listened to, amongst other art mediums. So what happened?

The music of today is becoming emotionless, tamed -guys singing in falsetto and girls with a 5-note range is what's popular right now. If you do sing your guts out, well, you're too intense for most people. When it comes to music, it's like people don't want it to voice their emotions. They want background music, music to safely escape from their emotions with.
The average human will want to get a hug and go to bed thinking the world isn't so bad after all. The average human will not want to go to bed hoping the night will bring him guidance as to what to do concretely to make the world a better place.

Funny, or sad, really, how when it comes to saving ourselves, we would rather it be somebody else. But when it comes for saviors to manifest themselves, and for us to select one, or a few, the ego steps in, and so, as humans usually don't enjoy feeling like other humans are greater than them -have more courage, guts, passion, will-power, whatever you wanna call it. So the would-be saviors are deemed as shockers, and are censored, and banned.

It makes it hard for society to renew itself when it hates/fears itself so much, and is too lazy to care. Or are we perhaps too jaded because everything's already been done? For example: there was Alice Cooper, and then there was Rob Zombie, and then there was Marilyn Manson. And now, well, any young goth singer out there trying to be the new That, it's not like he'd be bringing about anything more shocking than what his predecessors/idols have already brought about. He's mostly preserving the archetype.
Which is an extremely good thing.
Why? Because the answer to my question above is No. I've experienced way too many moments of would-be-shaming-were-I-to-care to say that society is jaded.

I believe the right thing to say is that society might be tired of being shocked, because of shock-overload from the media. Mostly, society would like everything to be cotton-candy. Mostly, especially over the past few months, humans would like to wake up one day and hear that World Peace has Now been proclaimed.  and as for their own lives, humans would like to be able to walk the course of existence effortlessly -float through that cotton-candy, basically. People are likely to avoid any situation that will make for any overload of emotions because, for the most part, humans don't know how to control Emotions. Emotions lead to Irrationality, which leads to Doing Things You're Not Usually Doing, leading to Stepping Out Of Your Comfort Zone, leading into The Unknown, aka humans' one great fear.

Now, I'm not saying I'm above this. I fear the unknown as much as the next human. But then I'm also curious, with an insatiable thirst for knowledge, and find the outcome of the unknown to be a lot more enticing and appealing than the outcome of what has already been tried and tested and approved by everybody else.

Am I that much of a shocker? Not really. I never thought so anyway.
I'm mostly preserving the archetype.
But recently, someone deemed my promo photographs as scandalous.
Again. In 2016.
I therefore proclaim myself a Shocker.

It is my nature and purpose to shock you.
To pull you out of your comfort zone.
To say that which will not be said, to expose that which covers itself up.
To question everything -I must know the Why of Everything, in order for me to understand Everything.
In a post on my personal blog, www.alexrobshaw.com, I once wrote how I am not PG. My art is for people who have experienced life and aren't afraid to do so.

Thing is, most people are terrified of what's out there -life.
But it's time for a revolution, and I know it has to start with me.